This year’s event is quite different from previous editions, as security concerns related to the coronavirus pandemic prompted Microsoft to turn its largest software conference into a “48-hour digital experience” that takes place entirely in line, including a speech by CEO Satya Nadella (pictured). But as usual, the software and cloud giant has launched a wide range of new products and services.

This year, Microsoft’s primary focus is on unifying app development into the vast Windows 10 ecosystem that now has more than one billion devices. To achieve this, Microsoft announces “Project Reunion,” which is the company’s vision to “unify and evolve the Windows development platform” to make it easier to build apps that work on all versions and devices. Windows.

“Over the past two years, we’ve broken down the barrier between Win32 (also known as Windows APIs) and the Universal Windows Platform (UWP) APIs,” wrote Kevin Gallo, vice president of the platform. development, in a blog. Publish. “Project Reunion is expanding this effort to make it easier to build a great Windows application. “

Project Reunion is Microsoft’s effort to unify existing Win32 and WWP APIs to make them available, decoupled from the Windows operating system, through tools such as NuGet. The idea is to provide a common platform for new applications and to help developers modernize existing applications, whether they are written in C ++, .NET, or React Native programming languages.

“As we decouple existing APIs and add new APIs, we also do polyfill work as needed to keep APIs running at the lower level on supported versions of Windows,” said Gallo.

One of the main components of Project Reunion is WinUI 3 Preview 1, which is a high-performance, Windows-optimized native user interface framework that developers can use to create new applications or update existing ones so that they can evolve on several devices.

The second major component is WebView2, which is available in the latest .NET preview and allows web content to be integrated into native Windows applications so that code can be shared across platforms.

“Now any Windows application can integrate web content with the power of Microsoft Edge and Chromium,” said Gallo. “WebView2 provides full web functionality across the spectrum of Windows applications, and it’s decoupled from the operating system, so you’re no longer locked into a particular version of Windows. “

The new tools are both available now through the Project Reunion GitHub repository, which will also be used by Microsoft to share progress during the ongoing implementation of its new developer vision.

“Project Reunion is important as it streamlines Windows development by decoupling the operating system from the application later,” said Patrick Moorhead, president and senior analyst at Moor Insights & Strategy. “Simply put, I think Microsoft will recruit more developers because they can do more with less effort. Customers can take advantage of the new features of the applications because they do not need to upgrade the operating system.

Microsoft’s collaboration tool Microsoft Teams has garnered a lot of attention in recent months as millions of people adjust to the new reality of working from home. So it’s no surprise that Teams is getting some new features this week. For example, admins now have the ability to quickly create new teams using customizable templates, ranging from common business scenarios like event management and crisis response, to industry-specific templates like hospital services or bank branches. Additionally, Microsoft plans to make its Power Virtual Agents app available in the Teams app store, which will allow chatbots to be created in minutes.

Microsoft is also making it easier for users to integrate its Power Platform business analysis service with Teams, making it possible to share specific reports or charts in the reports, with different users. As part of this evolution, new Power Automate business process models are making it easier to streamline workflows across teams, Microsoft said.

“For Teams, the most impressive thing is how more scalable the platform is using the Power platform,” Moorhead said.

Other new features include the ability to schedule virtual appointments through the integration of the Reservations app into Teams.

“With a single planning experience, you can manage multiple departments or locations and securely host everything from candidate interviews and student office hours to financial consultations and medical visits,” said Jared Spataro, vice president of Microsoft 365.

Microsoft’s Fluid Framework, which premiered at Microsoft Ignite last November to allow developers to add more collaboration features to their apps, is also getting a few updates. The most important announcement here is that Microsoft is planning to make the framework fully open source. 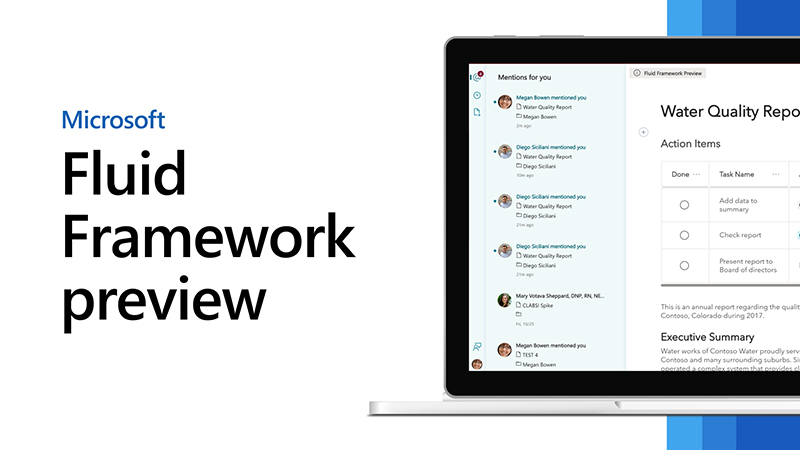 Spataro said the move means developers can now access key infrastructure from the Fluid Framework in their own applications.

The Fluid Framework remains in preview, but now integrates with the Microsoft 365 suite to enable collaboration on dynamic documents and the creation of connected components that can be shared between applications.

“For example, tables, charts, and to-do lists can be inserted into Outlook for the web, so your sales figures, project tasks, and research reports are always up to date,” Spataro said. “Within Office.com, Fluid Framework workspaces can be created and managed, including in your Document Activity Feed, Recommended List, @mentions, or search for them on Office.com.”

A new supercomputer for next-generation AI

In one of its most surprising announcements today, Microsoft said it has built a new supercomputer which it says is one of the five most powerful machines in the world.

The new supercomputer was built as part of Microsoft’s continued collaboration with OpenAI Inc., a San Francisco-based lab that works to develop artificial intelligence at the human level, specifically to train the AI ​​models of this. organization. The machine, which includes more than 285,000 processor cores, 10,000 graphics processing unit chips and 400 gigabits per second of network connectivity for each GPU server, will be accessible through Microsoft’s Azure cloud platform, where it can be accessed. be used to train an extremely important artificial intelligence. models, the company said.

Microsoft explained that traditional and smaller AI models work by using many labeled examples to learn unique tasks such as translating languages, recognizing objects, and identifying key points in an email. But he says these tasks can be done much faster by a single massive model capable of learning from billions of pages of publicly available text, like Wikipedia.

“This type of model can absorb the nuances of language, grammar, knowledge, concepts and context so deeply that it can excel at multiple tasks: summarizing a long speech, moderating content in game chats.” live, find relevant passages in thousands of legal files or even generate code from GitHub scouring, ”the company said.

Microsoft has already built its own family of large AI models, which it calls the Microsoft Turing models. These have already been implemented to improve language comprehension in Microsoft services such as Bing, Office, and Dynamics, and now the company wants to make them available to others through the new supercomputer, which will be available as part of the process. of its Azure AI services.

The company plans to open its Microsoft Turing AI models later this year, and it will also make various recipes available to train them in Azure Machine Learning.

It works by clicking a button in the customer’s preferred Azure database service to link directly to the data with Azure Synapse Analytics. Operational data is then “automatically and continuously” made available to Azure Synapse Analytics so that no complex data extraction / transformation / loading pipeline or additional database compute resources is encountered. necessary.

Show your support for our mission by joining our community of Cube Club and Cube Event experts. Join the community which includes Amazon Web Services and Amazon.com CEO Andy Jassy, ​​Dell Technologies Founder and CEO Michael Dell, Intel CEO Pat Gelsinger and many other luminaries and experts.